Power tools can make your job a whole lot easier and sometimes their cost can save you money in the long run.

It’s important to choose wisely though to get the most bang for your buck. Since a lot of power tools often have overlapping uses and benefits, it’s vital to pick the right tools for your projects.

To help simplify the process for you we found 11 power tools every homeowner should have in their arsenal.

Plus we’ll talk about the benefits & uses of these tools so you can decide which ones make the most sense for you! Let’s get right into it…

11 Power Tools That Every Homeowner Should Have 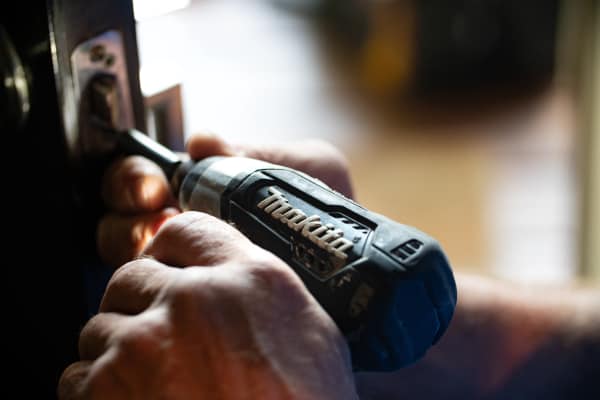 As you probably know, a drill is used to make holes in wood, metal, and other hard surfaces to, say, run plumbing or cabling.

Drills can also be used for driving fasteners, and they often have torque limiters to protect screws from damage.

Among the drill types available out there, the cordless drill is probably the best one to get for home use. That’s because:

Cordless drills are the most common drill type available out there.

They can be pricey and may require you to purchase batteries separately, but one should allow you to do any driving or hole-making jobs you might come across as a homeowner.

A circular saw is typically a handheld power tool that uses a toothed disc for cutting materials, usually wood, metal, or plastic. Tough abrasive blades can cut through masonry as well.

Circular saws are used for making straight cuts in the material. Typically, people use circular saws when dealing with shorter workpieces.

Some circular saws also have tilting bases that allow you to make beveled cuts.

A table saw is a stationary variation of the handheld circular saw. Both tools use circular saw blades, but the difference between the two saws is that table saws have a tabletop for additional support.

Table saws are used for making straight cuts, and thanks to the tabletop and integrated fences, keeping both short and long workpieces stable is fairly easy.

Though for short pieces, a handheld circular saw would be a better choice since it can be difficult to cut them on a table saw.

With some modification, table saws can also make beveled & mitered cuts, and you can even make dado or rabbet cuts.

But if you need to do a lot of beveled or mitered cuts, then a miter saw would be a better option. And for dadoes or rabbets, you may want to consider a router tool.

Pneumatic (the same as air-powered) tools require compressed air at a certain pressure for operation. An air compressor, as you’d guess from its name, is the tool that you would get compressed air from.

Air compressors mainly increase the pressure of the air by reducing its volume, though some compressor types force the air through at high speed to increase its pressure.

When shopping for an air compressor, take a look at electric options first.

They are solid enough for probably most homeowners, and unlike gas-powered compressors, they don’t require fuel, need less maintenance, and don’t produce emissions.

For high-power jobs though, consider getting a gas-powered air compressor.

Palm sanders are the smallest and weakest power sanders out there. They have got their name since they are typically handled with the palm of the hand.

You would use a palm sander right before applying varnish or paint to wood.

Palm sanders use finer-grit sandpaper that is capable of imparting a polished finish to the wood surface.

To sand the workpiece, palm sanders move the sanding pad in small circular orbits, creating friction with the material.

More advanced and expensive palm sanders also have orbital action where the entire head that the pad is attached to moves in circular or elliptic orbits as well.

What such orbital action allows for is reduced swirl marks which regular palm sanders are more or less notorious for.

Since palm sanders are similar to orbital sanders (another similar type of hand sander), many first-time tool buyers confuse them with each other. The uses, features, and benefits do overlap in these tools, but generally:

While orbital sanders are better in terms of reducing swirl marks, palm sanders are less likely to leave deep and noticeable marks since they are using finer sandpaper that removes less material.

If you tried to suck up sawdust, nails, screws, or water with a regular vacuum cleaner, you would damage it.

Household vacuums don’t have heavy-duty motors and hoses, and their internal components don’t have protection from sawdust that is finer than regular dust.

Shop vacs can do all this because they are made with the hazards of tougher messes in mind. While you can clean the jobsite manually, a shop vac will make the cleanup quicker and easier.

You could also use a shop vac for general home cleaning, but doing so, you would waste its heavy-duty orientation.

Plus, household vacuums are more convenient for cleaning since they have various attachments designed with furniture and fabric in mind.

Impact drivers are similar to drills, but they’re a little different.

Impact drivers are named so because in addition to the rotation motion of the bit, they also deliver hammering action to prevent cam out. If you didn’t know, cam out is when the bit slips out of the head of the fastener.

An impact driver is the right tool when dealing with larger screws and bolts that can’t be tackled by drills or screwdrivers. Furthermore, thanks to the higher torque output, impact drivers can loosen over-torqued or corroded fasteners.

Just like drills, impact drivers can be powered by compressed air or electricity.

The latter can be corded and cordless, and for the average homeowner, a cordless impact driver is a better option since it’s portable and doesn’t require an air compressor.

Here, we should make a distinction between impact drivers and impact wrenches. We didn’t include the impact wrench on our list since most homeowners don’t need it.

An impact wrench delivers much higher torque than an impact drill.

The higher torque is achieved via a rotating hammer that strikes the output shaft of the tool when the latter encounters resistance, for example when dealing with a tight or stuck lug nut.

Impact wrenches are commonly used in automotive assembly or repair, so most homeowners won’t need this tool. An impact driver will probably suffice with most fasteners you may encounter.

The oscillating tool (also called power multi-tool) is a multi-use tool that has an oscillating output shaft.

There are various accessories available for the power multi-tool out there, including cutting blades, scraping blades, as well as polishing and sanding attachments.

The wide array of attachments available out there is where the name of this tool comes from.

The biggest benefit of the power multi-tool is that it allows you to buy a single tool and do a lot of things with it.

Besides, since the fitted attachment is offset, you can keep the blade flush with the working surface, allowing you to easily scrape off carpeting, saw nails off, do plunge cuts to make outlet boxes, and not only.

Aside from that, you could use a multi-tool for:

Angle grinders are portable grinding tools with the grinding wheel mounted at 90 degrees to the handle.

While angle grinders have originally been used for grinding, they have many more uses now thanks to the variety of attachments available on the market.

With a specific grinding disc, an angle grinder could be used for tile, wood, metal, and even concrete work.

By using a sanding pad, you could do gentler material removal or even smoothen the workpiece out, depending on the grit of the pad.

Overall, depending on the attachment, angle grinders can be used in:

A reciprocating saw is a handheld tool that uses a push-pull action in the blade to cut materials, hence the name.

Reciprocating saws are rugged tools with tough blades and are thus used in construction and demolition work where delicacy and precision are of secondary importance.

Among the jobs that you would do with a reciprocating saw are:

Reciprocating saws can make both straight and curved cuts, which makes them useful when you need to quickly cut out a shape inside a workpiece.

Because of this they are more of a modeling & finishing rather than demolition tool.

You could use a barrel grip jigsaw to finish the cuts started with a reciprocating or a circular saw.

Aside from that, since jigsaws often have beveling bases, they can be used for making more complex cuts than reciprocating saws, e.g. for making countertop edges or moldings.

Where jigsaws particularly excel is curved cuts. They are much easier to do curved cuts with than reciprocating saws, and jigsaws also make these cuts much more cleanly.

This can be useful when making decorative shapes inside a workpiece, for example.

Pick A Power Tool From A Single Brand

You may see this tip in our other posts or DIY forums, and it’s definitely one to follow…

No matter what kind of power tools you are buying and how they are powered, try to buy them from as few brands as possible.

A couple reasons are:

Given that popular brands like BOSCH, Makita or Dewalt offer great power tool lineups, you shouldn’t have issues with gathering a whole power tool arsenal from the same brand.

Join our exclusive 2,500+ email list to get tailored advice, product roundups, and be the first to see our new content. No spam, we promise.