There are many power tool types available on the market, and while they all have very distinct uses and benefits, they often confuse new homeowners. What makes choosing the right power tool for your job even more difficult is that the uses of many tools overlap with each other.

In this post, we’ll have a look at commonly used power tools and will try to draw a line between them by talking about their uses, benefits, and drawbacks.

Power Tools Names And Their Uses

A circular saw is a motor-powered saw that rapidly rotates to cause friction and cut wood.

Although wood is the most common material circular saws are used for, you can find saws that can cut metal and even concrete.

Circular saws are portable and do great when making straight cuts in the workpiece. But circular saws aren’t the best in terms of precision since they provide limited support in keeping the wood steady in place while cutting.

Usually, when talking about circular saws, people mean the handheld saw that uses a circular saw blade like the one in this image. 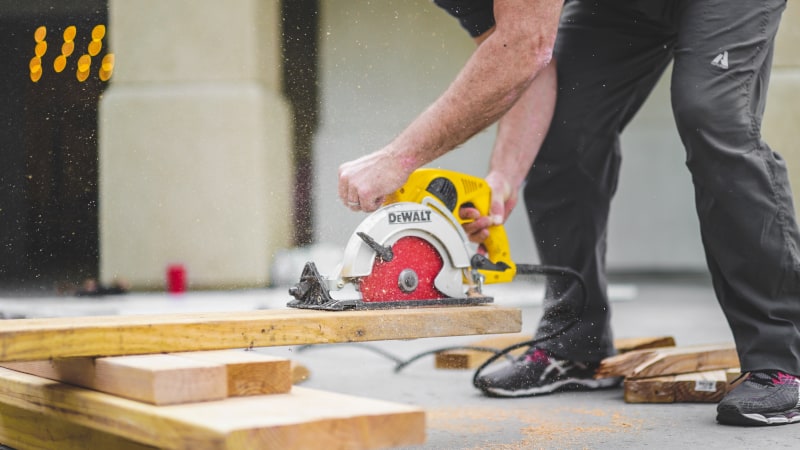 Check out our list of the… Best Circular Saws for Woodworking

However, there are some other saw types available that use circular saw blades but go by different names such as…

A table saw consists of a table and a circular saw blade that sticks out through the tabletop. The tabletop provides support for whatever you happen to be cutting.

Table saws are primarily used for making straight cuts and work great for cutting longer pieces. They typically have woodworking fences to assist you in guiding the workpiece as precisely as possible. 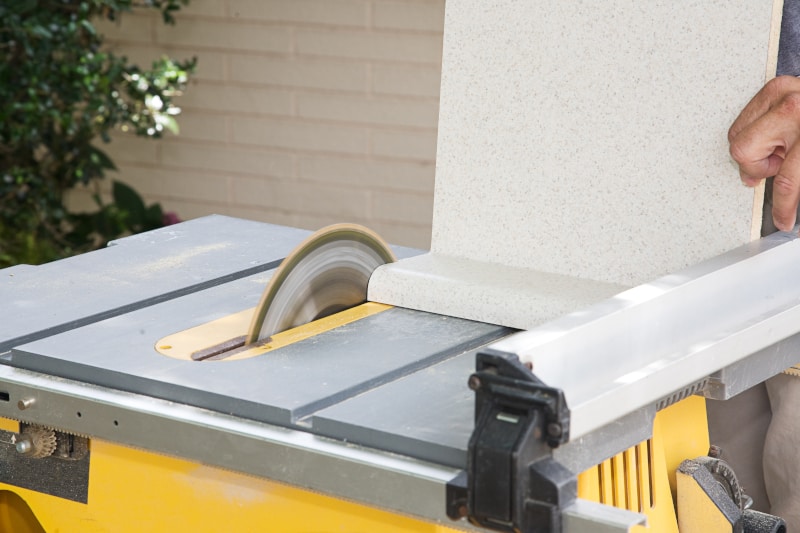 With some modification, table saws can also be used for cross cuts, miter cuts, beveled cuts, and even dado cuts.

Here are some of the… Best Table Saws for Beginners

Miter saws consist of a circular saw blade and a small platform to place what you are cutting on. 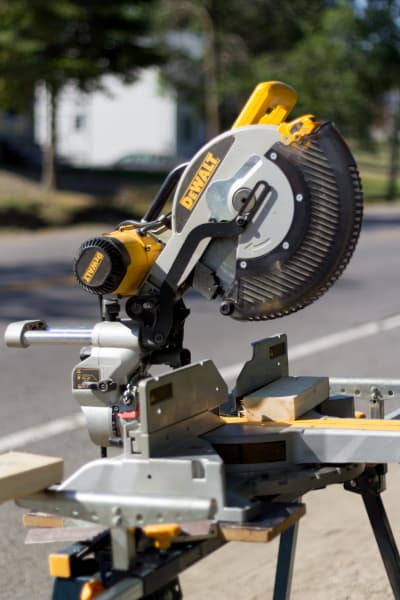 Out of the box, miter saws tend to be used with shorter pieces of wood. With a DIY or commercially-made miter saw stand, one could easily cut longer workpieces as well.

While miter saws can also be used for doing straight cuts, they are mostly used to make accurate crosscuts and beveled cuts like those used for molding and trim work.

The nailer or brad nailer (also known as a nail gun) is a tool used to drive nails into wood, metal, and other types of materials. It’s basically a powered replacement for a hammer.

Nailers are usually powered by air, highly flammable gases like propane or butane, electromagnetism, or even small explosive charges.

The fasteners for nailers are mostly sold in the form of long clips, similar to a clip of staples.

There are a variety of fasteners available, starting from small headless 23-gauge nails used to attach material together and ending with 15-gauge nails commonly used as finish nails.

Make sure to read… What are the Best Finish Nailers for Baseboard?

Drills are primarily used for making round holes in material to run cables, wires, piping, or make recessed holes for light fixtures.

A drill can also be used for driving fasteners like this one below installing a new door knob. 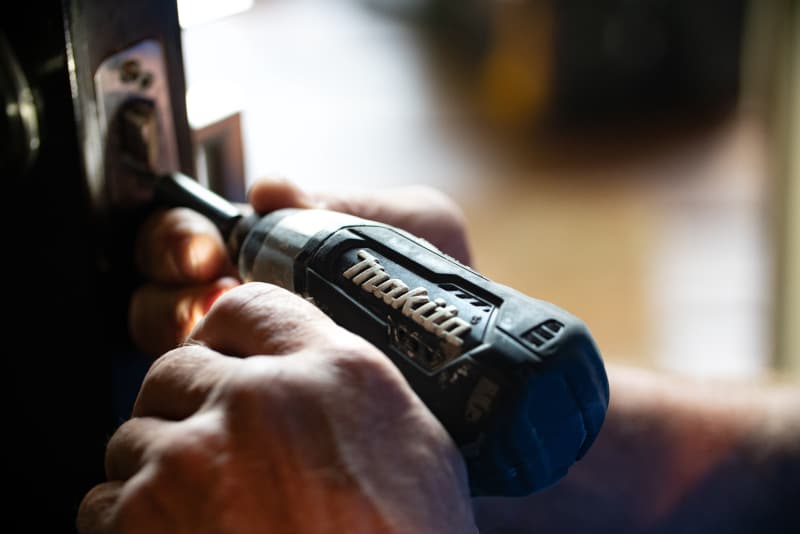 Some drills have torque controls that allow you to limit the amount of torque supplied to screws and bolts. This prevents overtightening and damage to the screw or the threading.

Depending on the type of the bit used, drills can make holes in wood, metal, and even concrete.

For concrete, contractors will use specialized drills such as the hammer drill or the rotary drill, with the latter being able to hammer and drill simultaneously.

Impact drivers are similar to drills, but thanks to their generally higher torque, they are much better suited for driving fasteners. An impact driver can relatively easily loosen large fasteners that are over-torqued or corrosively frozen.

Impact drivers may also be used for general screw and nut loosening and tightening, as well as for drilling holes just like a drill does. However, drills are better for drilling since they have higher RPM and a wider variety of bits available.

Without diving too deep in the technical details, impact wrenches employ a rotating hammer that strikes the anvil (output shaft) of the tool to deliver very high torque. What the high torque allows for is removal and tightening of large fasteners.

Most commonly, impact wrenches are used to quickly loosen or tighten large nuts and bolts, like those on car wheels. 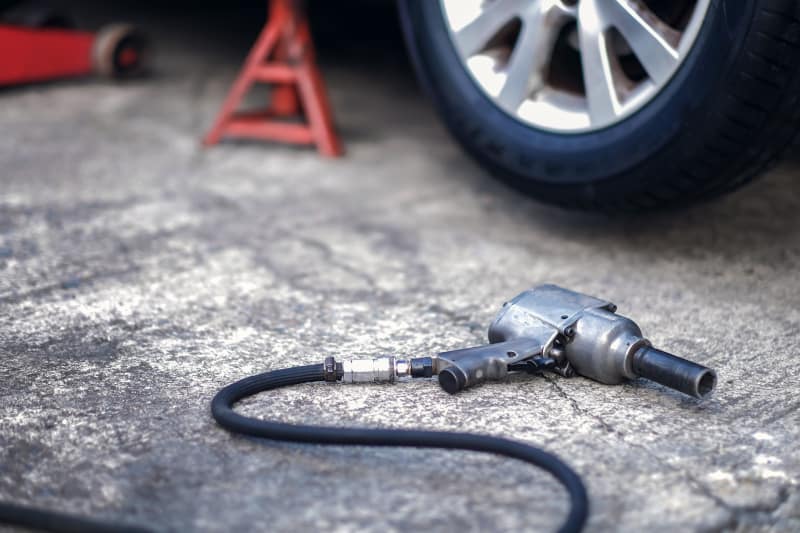 An impact wrench may also be used to loosen frozen or rusted fasteners, though in some cases, the high torque may actually break the stuck fastener.

An angle grinder (also called disc or side grinder) is a portable type of grinder used for grinding and polishing.

This tool is commonly used in metalworking, but you may also find angle grinder discs suitable for hard materials such as concrete.

Originally angle grinders only had abrasive discs for quick material removal, but now, you can find various other types of attachments for this tool making it very versatile.

Aside from the mentioned polishing discs, you may find sanding discs and even cutting wheels for angle grinders. 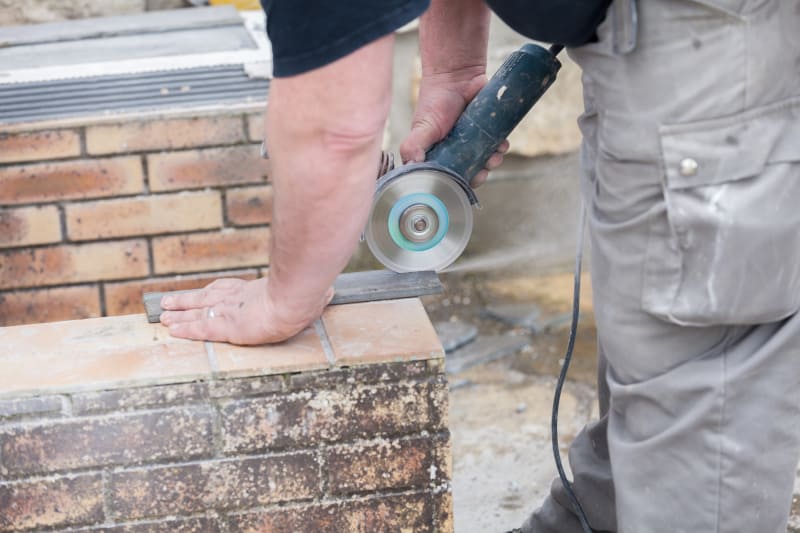 Compared to traditional tabletop grinders, angle grinders allow for increased mobility and precision. Plus accurate material removal is fairly easy with angle grinders precisely because they are handheld.

If you need to cut concrete like the image above here are the best angle grinders for that task.

The chainsaw is a portable kind of motorized saw that uses a rotating chain with teeth to cut material.

Most often, chainsaws are used for woodcutting jobs such as trimming trees, pruning larger bushes or shrubs. Believe it or not you can also find specialized chainsaws that can cut concrete.

Chainsaws cut very quickly thanks to the friction delivered by the rotation of their chain. The cuts achieved by chainsaws aren’t too delicate since cutting speed is more important in them.

A jigsaw is a tool with a reciprocating saw blade. The blades used in jigsaws are commonly small and delicate, which make them great for cutting curves and complex shapes. 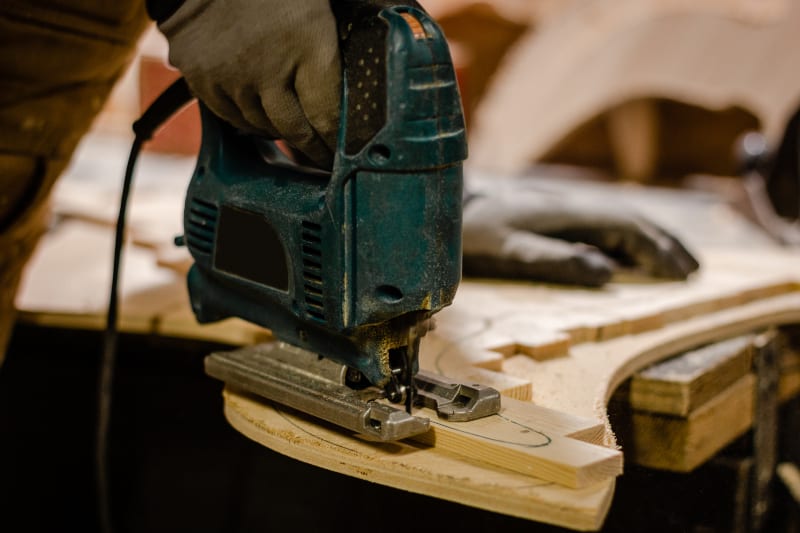 Aside from that, jigsaws can be used for plunge cuts inside the material. Some jigsaw models can also make beveled cuts where the blade is angled to the right or left.

While jigsaws can technically be used for making straight cuts, this definitely isn’t their strong suit. If you don’t need to make complex shapes, a table saw, circular saw, or a miter saw will be much better.

Besides, jigsaws cannot remove material quickly, partly due to the delicacy of the blades. They are more for slow work where detail and precision are important.

However, the term “jigsaw” is specifically used to refer to the tool that is designed for more delicate work, while “reciprocating saw” refers to saws that are used in construction and demolition jobs.

Reciprocating saws are more powerful, bulkier & heavier, and have more durable blades that can cut through material quickly. Some reciprocating saw blades are abrasive enough for cutting concrete.

Due to their more demolition-oriented design, reciprocating saws don’t make as precise cuts as jigsaws. They can still be used to make curved cuts and shapes fairly easily, but the precision and delicacy aren’t there.

Thanks to the narrow blade, a reciprocating saw can also be used to cut piping in areas that are inaccessible for angle grinders. 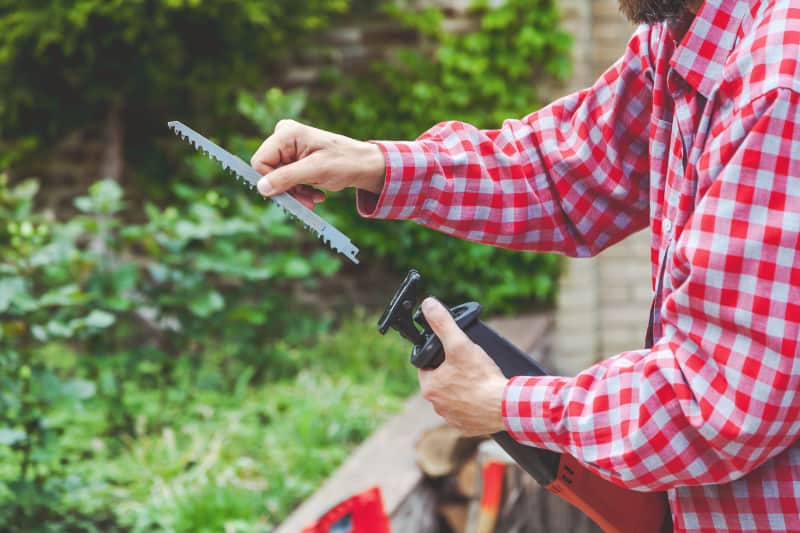 A bandsaw consists of a continuous toothed band that is mounted on two or more wheels. Like in a chainsaw, the toothed band forms a rotating loop.

Bandsaws have some of the benefits of table saws, reciprocating saws/jigsaws, and miter saws.

They are typically mounted on stands for added stability. In this sense, bandsaws are similar to table saws since they provide a support surface for what you are cutting.

Like in jigsaws and reciprocating saws, the toothed band in bandsaws is pretty thin, which allows for very easy curved cuts.

Bandsaws with fences can also make straight cuts, but if your jobs mostly require only straight cuts, a bandsaw is overkill – a table saw is a better choice.

Some bandsaws also have tilting tables that allow for beveled cuts and there are even some great options for cutting metal too.

A router is a handheld tool that is used to hollow out hard material, most typically wood. Some routers can also make holes in harder materials like metal.

The two key components in a router are the broad base plate and the narrow blade that protrudes far out beyond the base. The base allows you to keep the tool flush against the workpiece, while the rotating blade does its job of hollowing the material out.

Depending on the size of the blade, the router may cut out holes of varying depth and size.

Aside from hollowing out, routers may be used to:

To assist with these jobs, you may find various kinds of bits on the market, including profile cutters or fluted cutters.

A belt sander is a type of sander that uses a loop of sandpaper mounted on a pair of rotating drums for sanding.

Belt sanders can be handheld or stationary. Handheld belt sanders are used for jobs where high precision is required, while stationary sanders are more common in applications where you need to remove material quickly.

Stationary belt sanders are often used with non-ferrous metals like aluminum or copper.

You may think that a grinder would do a better job of removing material from metals, but non-ferrous metals tend to clog grinding wheels very quickly.

The sandpaper used in belt sanders is less prone to clogging since it’s opened up and somewhat cleared when going around the drums.

Do you need to spruce up some old wood floor? Get your project started right with one of these budget belt sanders.

Another type of sander, an orbital sander consists of two components:

The idea behind the combination of elliptic and rotational movement is to prevent the sander from covering the same area too often, allowing for a more even and consistent finish with no swirl marks.

Orbital sanders are used for fine sanding and finishing on wood items rather than for material removal. 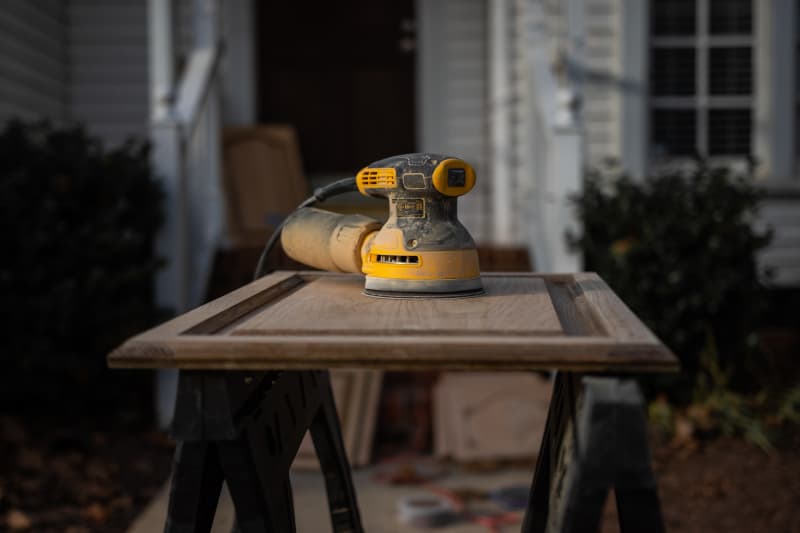 If you were to use an orbital sander for material removal rather than for finishing and polishing, you would waste the no-swirl benefit delivered by the orbital motion.

The main component in the power multi-tool is the oscillating accessory mount that can take attachments for sanding, scraping, polishing, sawing, and cutting.

The wide range of available attachments is where the name of this tool comes from and you might know it by the brand name ‘dremel tool’.

The mounting point on the multi-tool is offset, which allows you to place the attachment flush with the working surface. This can be very useful when cutting nails in a piece of lumber, making edge cuts, plunge cuts or polishing corners.

The biggest benefit of the multi-tool is its versatility for not too much money.

We know the power tools names and uses can often be confusing so hopefully now you have a better understanding of the main ones out there.

Over time you will no doubt increase your arsenal of tools and armed with your newfound knowledge you can spend your hard earned money on the ones that count!