You can find many different saw types for woodworking, and that’s great – this allows you to find the right tool no matter how specific your needs are.

With that said, for a newbie, it’s pretty difficult to distinguish between different power saw types, their uses, benefits, and drawbacks.

Today, we’d like to talk about miter saws and circular saws specifically.

Both are very popular woodworking tools that have many common uses and benefits, but there are some big differences between them as well. 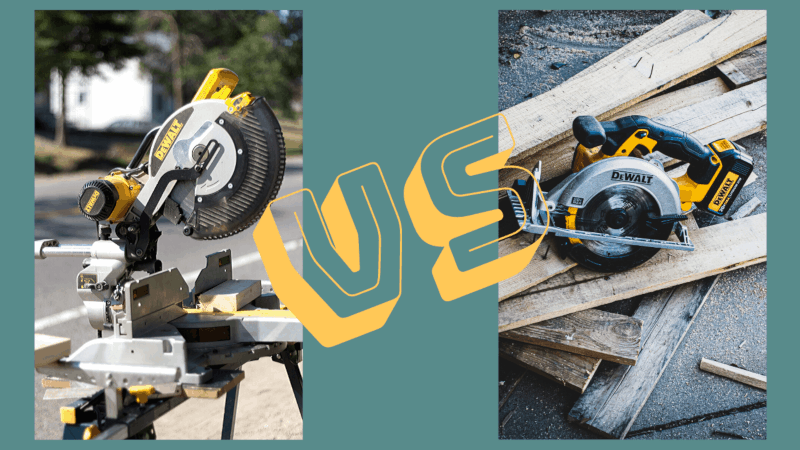 What Is A Circular Saw?

A circular saw is a handheld power saw that uses circular saw blades. The blade rotates at high speed to make cuts in the workpiece which is usually made from wood, plywood, plastic, or metal.

To avoid confusion, know that the phrase “circular saw” is typically used to refer to the handheld tool that uses circular saw blades.

But also know that table saws, miter saws, and other tools that use circular saw blades can also be technically considered circular saws.

What Is A Miter Saw?

A miter saw also uses a rotating circular saw blade, but the blade is mounted on a support arm that in its turn is mounted to a miter saw table. Unlike a circular saw, miter saws aren’t handheld – you place the material on top of the table and lower the blade to cut it.

There also are a few miter saw subtypes that you should know about.

Standard miter saws allow you to do miter cuts – that is, cuts where the blade is rotated to the right or left up to 45 degrees.

Compound miter saws also allow you to tilt (bevel) the blade right or left to make beveled cuts. Again, the range of tilting usually is up to 45 degrees.

Then, you also have sliding compound miter saws whose blade can move forward and backward across wide pieces of material.

Make sure to read… Top 5 Best Miter Saws for Woodworking

With miter saws, the blade is dropped onto the workpiece to make the cut. With circular saws, you feed the piece of material through the blade.

On the other hand, miter saws have a dedicated place for the material and don’t allow much positioning in the blade.

The most important difference between circular and miter saws is that they excel at different types of cuts. For a quick overview, have a look at the table below:

This table gives you an idea of what you can and cannot do with circular or miter saws.

Now, let’s try to understand the “why” behind each cut.

Circular saws frankly aren’t the best for rip cuts, but they can do them pretty well, especially if you use a guide rail.

On a side note, for making straight rip cuts specifically, table saws are much better than circular saws since they provide more support to the workpiece.

Miter saws can’t do rip cuts since in the default blade position, the workpiece is placed perpendicular to the blade. To do a rip cut, you would need to rotate the blade 90 degrees to the right or left, which no miter saw can do.

With that said, if the wood is short enough to be placed on the miter saw table, you could technically do rip cuts. But since rip cuts are usually made on long boards, this doesn’t really count in our opinion.

Crosscuts are cuts made across the wood grain and this is where miter saws shine.

In fact, miter saws are designed specifically with crosscuts in mind. The wood is placed perpendicularly to the blade against the rear fence, and since the blade always comes straight down, it’s very easy to make perfect, consistent crosscuts on a miter saw.

Sliding compound miter saws are especially good with crosscuts since they can make much wider cuts than non-sliding units.

You could do crosscuts with a circular saw as well, but since you have to position the saw and feed the wood through the blade manually, you can’t ensure perfectly consistent cuts every time.

You could do mitered cuts both with a circular saw and a miter saw, but miter saws support miter cuts by default.

You can rotate the blade to the right or left up to typically 45 degrees in miter saws to make consistent miter cuts.

If you run a circular saw through a piece of wood at an angle, you could also perform mitered cuts but they won’t be as precise.

Not to mention that circular saws usually aren’t intended for miter cuts and don’t have guides to assist with them.

Compound miter saws can make beveled cuts as well where the blade is tilted to the right or left. Beveled cuts can be useful when making countertop edges or moldings, for example.

As mentioned above, the bevel capacity in miter saws is usually up to 45 degrees both to the right or left.

If you tilt the woodpiece at the desired angle, you could do beveled cuts with a circular saw as well.

But again, since compound miter saws have specific features for beveled cuts, no standard circular saw will ever come close in sawing easiness and accuracy.

If you find a circular saw whose base can bevel though, then you will be able to make bevel cuts conveniently. However, your accuracy may still suffer since you will have to position the saw manually.

To be fair, neither circular saws nor miter saws are great for rabbet & dado cuts. The best tool for this kind of cuts would be the router tool.

However, you could make rabbets & dadoes with both tools, although it may be impossible with some miter saws.

To make a dado or rabbet with a circular saw, you just have to progressively remove material in the area where you want to make the cut. Pretty much any circular saw can do this.

As for miter saws, you’ll be able to do rabbets or dadoes only with a sliding saw. This is because non-sliding miter saws can only move their blades up or down.

If you tried to make these cuts with a regular or compound miter saw where the blade only goes up and down, the bottom of the cut would be concave due to the shape of the blade.

A sliding saw would be able to make proper dadoes or rabbets since the sliding motion ensures that the bottom of the cut is flat.

Miter saws can effectively make cuts only in the workpieces that their tabletop can physically support.

So all kinds of sheets of plywood, plastic, or metal, for example, will be much easier to cut with a circular saw than a miter saw.

Miter saws can’t be moved around as easily as circular saws. Ideally, a miter saw should be placed on a miter saw stand to ensure additional stability and convenient working height, while circular saws may be used as-is.

Which Saw Type To Go For?

Since the main difference between miter and circular saws lies in their cutting capacity, you should base your decision on the kind of cuts and materials you are dealing with.

You would pick a circular saw if:

Keep in mind that for strictly rip cuts, a table saw would be a better option since it’s much easier to achieve perfectly straight and consistent cuts with it.

On the other hand, a miter saw would be good for:

Remember that miter saws will be effective only if you securely fit the workpiece on their working table.

To close out this discussion, let’s have a look at some safety tips to follow with either saw type.

If you made it this far then hopefully you have a good enough idea of which tasks miter saws and circular saws excel at.

The debate between miter saw vs circular saw does not end here as there will always be some woodworkers that prefer one over the other.

As with any tool you choose it really comes down to which one is right for the project you are working on right now.

Join our exclusive 2,500+ email list to get tailored advice, product roundups, and be the first to see our new content. No spam, we promise.